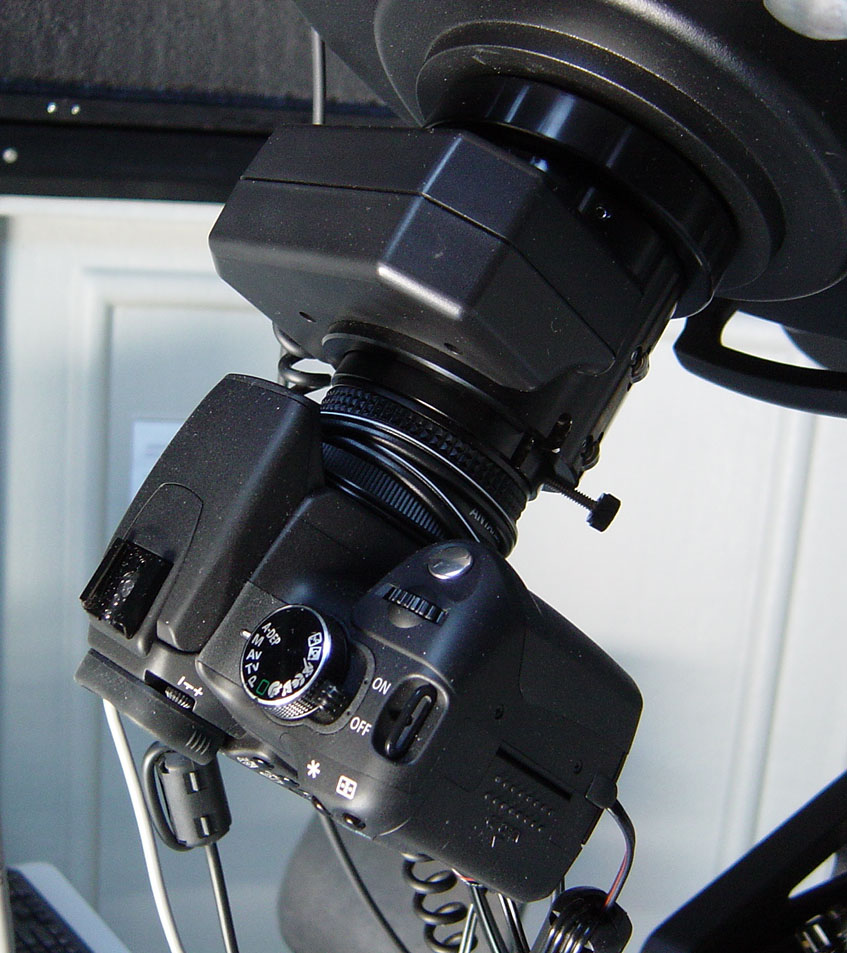 Above is the 8 megapixel Canon EOS 350D DSLR which connects at prime focus to the LX200GPS via a Meade f/6.3 focal reducer. The focal reducer is contained in a TA2P 2-inch adapter sourced from Scopestuff. The adapter along with a matching T-adapter ring connects the camera to the microfocusser on the telescope. The TA2P splits apart allowing it to be used either with or without a focal reducer. It also has a female thread inside its 2-inch barrel into which various filters can be screwed. Cables connecting the camera are (from left to right) the shutter controller, the usB image transfer and communications cable and the power cable to the fitting which replaces the camera's D.C. battery thus allowing mains powered operation.

Another camera , a 6 megapixel Canon EOS 300D DSLR is used interchangeably. It has been modded, which is to say I have opened it up and removed the UV/IR filter window which was located just in front of the CMOS image sensor. This filter has been replaced by a clear optical glass blank which passes the H alph wavelength to a greater degree than does an unmodded camera. Unfortunately it then also passes unwanted IR wavelengths which can produce star bloating. To eliminate this a narrrow-cutoff, high-transmission UV/IR filter is screwed into the TA2P adapter. It passes the H alpha wavelengths. 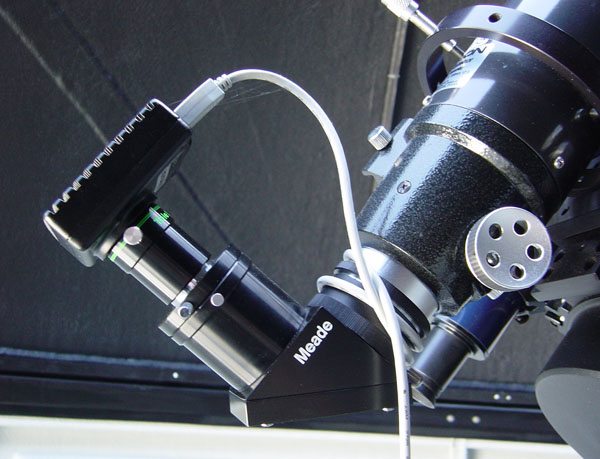 The guide camera (also capable of use for planetary imaging) is a Deep Sky Imager from Meade Instruments. It is relatively inexpensive and makes it possible to guide on stars down to about magnitude 10. It is powered from the USB cable which connects to to the back of the computer. Between the DSI and the Meade 2-inch diagonal is a 2X Barlow which doubles the focal length of the Orion ED/0 from its native 600 mm to 1,200 m. This meets the requirement that the focal length of the guide scope be  at least half that of the telescope used for the imaging. The 10-inch LX200GPS has a native focal length of 2,500 mm. The diagonal is needed to lengthen to optical path to bring the DSI to focus.